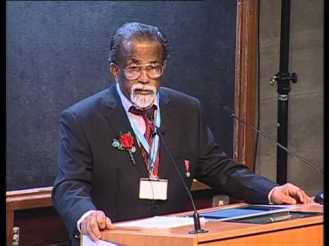 It seems a little strange for me to write an article on a theme like this. I am not going to speak of any religious, political leader or of any philanthropist, but of a scientist. A scientist from my district (he was born there, similarity ends there); had his initial education in Kerala and later in Chennai. He moved to US and is really big name in the field of Quantum Physics. He was the classmate of one of my professors in the college. But with some much clues too, very few Keralites (few Indians too) will recognize this amazing and towering figure in modern science, Ennackal Chandy George Sudarshan (essential tongue twisters associated with a Malayali house name is there). He is popularly known as George Sudarshan.

Sudarshan has been credited with numerous contributions to the field of theoretical Physics including Optical coherence, Sudarshan-Glauber representation, V-A theory, Tachyons, Quantum Zeno effect, Open quantum system, Spin-statistics theorem, non-invariance groups, positive maps of density matrices, quantum computation among others. His contributions include also relations between east and west, philosophy and religion. (I have taken from wikipedia; for those familiar with science, they can get the significance)

Now those who haven’t heard might think that he might be one of the greatest scientists. Yes, one of the greatest; but not one that could be easily dismissed. He missed nobel prize twice. First one in 1979 and the second in 2005 (it can’t be compared to many others who too miss it). His comments on the same goes like this (this is not just opinions, but supported by international scientists)

In 2007, Sudarshan told the Hindustan Times, “The 2005 Nobel prize for Physics was awarded for my work, but I wasn’t the one to get it. Each one of the discoveries that this Nobel was given for work based on my research.” Sudarshan also commented on not being selected for the 1979 Nobel, “Steven Weinberg, Sheldon Glashow and Abdus Salam built on work I had done as a 26-year-old student. If you give a prize for a building, shouldn’t the fellow who built the first floor be given the prize before those who built the second floor? (Quotes from wiki).

It is pity that such names remain only in the research papers, not even in text books. I hope it will inspire some of us to do great things like him (despite being unrecognized many a times; you might say geniuses are not behind recognition); some might be inspired to read a little more about such unknown Indians and others who make significant contributions in the world for the sake of humanity. 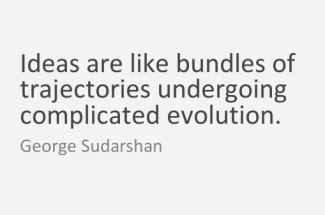