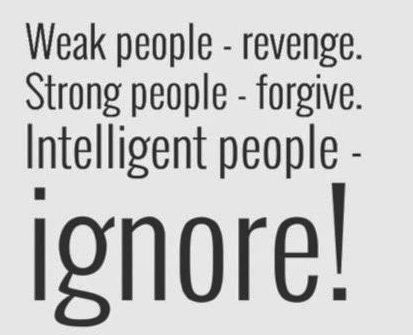 I got a very popular image in one of the whatsapp group and I was thinking about it. It looks very nice to be true. Occasionally it is attributed to the famous scientist Einstein. (considering he was intelligent). I am not so much interested to check whether Einstein said it or not. But I will put down some of my thoughts on the matter.

Even the modern psychology would say forgiveness is quite beneficial. Unforgiveness is one of the most deadly emotions and one of the major causes of psychosomatic diseases. Religions also preach about forgiveness. So by itself forgiveness has a value. It is considered even an attribute of divine. I appreciate all the people who possess that virtue. (I aspire for it, though I can’t do it always.. I occasionally go for revenge – not extreme forms, but subtle ones)

I am okay with revenge and forgiveness argument of weak and strong people. It is healthy too. But Wise (intelligent people) ignore!! Is it sensible always? Some might say a combination of forgiveness and ignorance is sensible. I will put down some cases..

When I surely agree with the quote that revenge is not the best option and forgiveness is a great virtue, I can’t agree that a combination of forgive and ignore (for wise strong person) is the best human reaction/response. (Here we consider the myth that ‘peace is the absence of war’ as the golden rule). I would consider a combination of appropriate action with forgiveness is a much better response. (In Panikkarean terms, peace can come about only insofar as humans move along with the rhythm of being with openness and receptivity, qualified by sincerity). Our authentic human responses can’t be running away from reality, but courageously facing the reality and struggling with it to create the better world.

As a catholic, I believe that God forgives us unconditionally. His mercy is there always. But it doesn’t mean he ignores me. He surely gives grace for me to overcome my wrongs. So along with forgiveness, there is also an action from him. 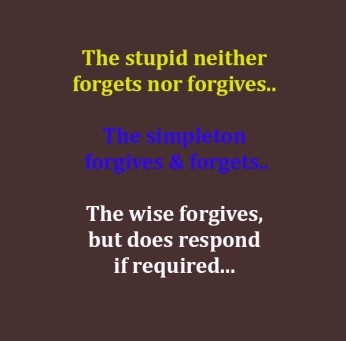