It is a very famous cliche phrase – We should use out of the box thinking or solutions. Many innovations in various fields have come out of the courageous pursuit of this cliche method by many of the inventors and innovators. It essentially means going beyond the established solutions or expected outcomes.

Jesus is one person who used this strategy to ward off the traps set by his detractors. They asked Jesus about the issue of paying tax to Romans. (Giving a Yes/No was problematic here). Jesus said to them, “Give back to Caesar what is Caesar’s and to God what is God’s.”And they were amazed at him. 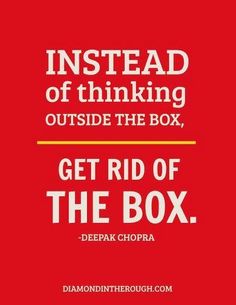 We also speak of going beyond the black & white solutions, yes/no options, true/false logic, large/small differentiation, left wing-right wing politics. The interesting aspect is that creative solution is not just a compromise between the two; it is not just a mathematical average of the two extremes. If you ask, what it is, it is difficult to define. The role of human creativity comes here. I think this strategy could be adapted for conflict resolutions.

Though in many cases, it is a call to go beyond the binaries, it is not just beyond binaries in many cases, but beyond the expected/predicted outcomes. We are called to creatively find alternatives for capitalism-communism, globalization – antiglobalization, conservative-liberal. In Indian politics, AAP (as I think) was considered to be a creative alternative to Congress, BJP and other parties. It can arise only from a constructive critique of the present day options and offering a creative solutions.

In present day washing machines (which uses fuzzy logical thinking), there is more than just hot and cold, but more options like very hot, moderately hot, lukewarm, moderately cold and very cold. But the outbox thinking or solutions needn’t fit in the straight line.

One example of out box thinking is Kekule’s discovery of the structure of Benzene ring. It is believed that he saw it in his dreams. (Out of the box thinking, even in dreams). It was not something which was already there, and that discovery revolutionized organic chemistry in a big way. Another example in the political sphere comes from the non-violence movement of Gandhi (followed by Nelson Mandela and Martin Luther). They were responding, but in a non-violent way. Yesterday’s solutions may not work for today’s problem, we may need adaptation (how and what is not predictable).

Another out of the box solution in dealing with conflicts, leading to reconciliation happens in Georgetown university in USA. In order to come to terms with the sale of 272 slaves to two Louisiana businessmen in 1838, Georgetown University and the Jesuits of Maryland should offer a formal apology and enact a series of reforms. They include renaming buildings, offering financial aid to the descendants of those slaves and committing new academic resources to study the impact of slavery on campus and in wider society today. (http://www.americamagazine.org/issue/georgetown-faces-slave-history)

We have enough and more conflicts between the countries, communities, groups, organizations and people. But there requires a tremendous will-power on the side of warring factions to offer a creative alternative. Can more of us start thinking of such possibilities? The world requires that use of creativity from us.